In the long run, locking people up in prison does little to increase the safety of the community. It may get a violent offender off the streets for a period of time, but in New Zealand, almost every prisoner gets out eventually. And whatever length of sentence is imposed by the judge, most get out early. This generally happens in one of two ways.

1)  Prisoners on short term sentences (currently defined as two years or less) are automatically released after serving half their time. Approximately 10,000 people are given short sentences every year – some for a week, some for a month, some for up to two years. They all get out automatically, without having to go the parole board, after serving half of whatever sentence was imposed.

The logic of early release is presumably that inmates on short terms are at low risk of violent offending and there’s an awful lot of them. To prevent them from completely clogging up the prison system, we let them out early. That makes room for people on long sentences.

2) Prisoners on long term sentences (two years or more – up to life) only get out early if the Parole Board decides they no longer pose an ‘undue risk’ to the community. What ‘undue risk’ means in practice is left up to the Board to decide. The Board has become increasingly risk averse and these days most long term prisons serve over three-quarters of their sentence.

If we abolished short term prison sentences altogether, that removes 1,900 people from the prison system. We seem to gain very little by sending these people to prison at all. They’re not in there long enough to attend the Department’s rehabilitation programmes – which don’t make much difference to re-offending rates anyway. And for most of those who end up in prison, being there doesn’t act as a deterrent.

What this means is that letting a few prisoners out early will have little to no impact on community safety. But what does community ‘safety’ even mean? The Global Peace Index uses a number of different indicators to assess societal safety and security – such as low crime rates, the level of terrorist activity or violent demonstrations, the stability of the country’s political structures, the proportion of the population internally displaced or made refugees and the level of conflict with neighbouring countries. In other words, the crime rate is only one of many factors that  contribute to community safety. 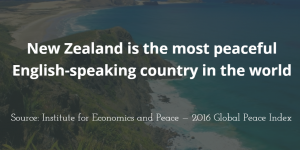 Based on the indicators above, in 2016, New Zealand was ranked the fourth safest country in the world on the Global Peace Index. In 2017, we were second – but ranked first among English speaking countries. So compared with the rest of the world, New Zealand, is one of the two safest places to live.

The safest country in the world is Iceland whose rate of imprisonment is only 38 per 100,000.  Austria which is ranked fourth has an imprisonment rate of 94. Denmark is ranked fifth and has a rate of 59. New Zealand’s rate is 217. Clearly, locking up more and more people as we have been doing has very little to do with making society safer.

Also see answers to similar questions in the Q&A section.